You are here: Home / Blog / Hydraulics 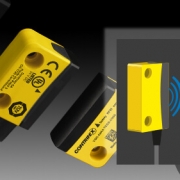 For any machine requiring a fixed guard-door or cover, the YSR series ensures reliable state monitoring (door open or closed). Thanks to their serial connection capability, YSR types are particularly suitable for applications using multiple sensors, such as long packaging or assembly lines. These RFID-coded devices are classified type 4 according to ISO 14119.

RFID technology enables the user to assign a unique code to each sensor and actuator system, which greatly reduces the risk of tampering. YSR sensors can also be connected in series via the OSSD output and inputs, allowing up to 30 sensors to connect with just one relay or controller.

Since each sensor can provide individual feedback, it is possible to identify which guard-doors are open and which are closed. This is particularly useful when many sensors are connected in series.

The YSR series is part of a range of non-contact safety sensors used to monitor guard-doors, hoods or covers. Thanks to non-contact switching and coded RFID communication, the service life of these compact sensors is very long. Housings are ECOLAB-approved and rated to IP6K9K, making them suitable for washdown applications.

The compact GIM500R inclination sensors in robust aluminum housing are ideal for use in harsh environments.
When it comes to tough outdoor use, many sensors reach their limits. Inclination sensors by sensor expert Baumer stand for maximum reliability and durability even in a harsh environment. Thanks to the extremely robust and resilient design, the new GIM500R sensors are ideal for outdoor applications in mobile automation and ensure maximum system uptime.

The GIM500R inclination sensors excel by ultra-high accuracy up to ±0.1˚ for absolute reliability and precise positioning. The E1-compliant and uncompromising design with optimal EMC properties, IP 69K protection and corrosion resistance up to C5-M is particularly addressing demanding outdoor applications. Their shock and vibration resistance up to 200 g respectively 20 g and the wide temperature range from +85 down to -40°C make the inclination sensors particularly durable in temperature fluctuations and any type of soiling. The integrated EN13849-compliant firmware meets the highest requirements on reliability which allows for standard components to be used in functional safety systems up to PLd level. Another hallmark of the new series is optional redundant system design where required.
Inclination sensors of the GIM500R series stand out by their compact aluminum housing, high cost-efficiency and maximum flexibility in system design. They fit in the confined installation space prevailing in mobile automation and heavy vehicles.

Elevated shock and vibration levels, even violently spraying hydraulic fluid during testing are no match for this rugged, mobile data acquisition system.

Mike Ellis, a Project Engineer with Gates Corporation, United States Customer Solutions Center focusing on Advanced Product Technology, and his team were recently in the field collecting hydraulic pressure and acceleration data. Their aim was to try to replicate and capture event data, in hopes of discovering the cause of customer failures on a skid steer loader’s rock breaker attachment.
During testing, elevated shock and vibration levels shook the Data Acquisition System and skid steer, excessive dust from the rock breaker covered everything. After several hours operating in the harshest of duty cycles, the failure occurred, violently spraying hydraulic fluid around the entire machine for about 10 seconds. After it was contained, Ellis’ team inspected the damage. The Data Acquisition System was covered in hydraulic fluid from top to bottom—soaked in approximately 6.35mm of fluid. Ellis remarked, “My colleague who operated the skid steer at the time of the failure was concerned the system was destroyed, or, worse yet, the data lost. I assured him that was not an issue. We wiped down the Data Acquisition System and downloaded the data from the test run and continued to test the remainder of the day.”
Recalling this incident and the operation of the system, Ellis confidently stated: “Our Data Acquisition System system is by far the most rugged piece of testing equipment we own. If my laptop or our other test equipment had been in the skid steer, they certainly would not have survived.”

The rugged and dependable capabilities of the eData Acquisition System were observed by Ellis even before Gates Corporation purchased their existing systems. He was thoroughly impressed with the Data Acquisition System’s use at many of his customers’ locations. Ellis adds, “It is an extremely accurate system. It is so easy to use; we use it as a check on our other pieces of laboratory testing equipment—to make sure they are set up correctly. If I do have a question, I know the brand is backed by a true engineering firm. In working with their support team, I can always call and ‘talk application’ not just to see if ‘a certain transistor is bad.’ Furthermore, the updates for the software are great. They are always backward compatible and, unlike our other lab equipment, there are no hidden or upgrade fees. I know that I can depend on our investment being supported for many years to come.”

Do you have a question or looking for a specific product? Let us help!

This site uses cookies. By continuing to browse the site, you are agreeing to our use of cookies.

We may request cookies to be set on your device. We use cookies to let us know when you visit our websites, how you interact with us, to enrich your user experience, and to customize your relationship with our website.

Click on the different category headings to find out more. You can also change some of your preferences. Note that blocking some types of cookies may impact your experience on our websites and the services we are able to offer.

These cookies are strictly necessary to provide you with services available through our website and to use some of its features.

Because these cookies are strictly necessary to deliver the website, you cannot refuse them without impacting how our site functions. You can block or delete them by changing your browser settings and force blocking all cookies on this website.

We also use different external services like Google Webfonts, Google Maps and external Video providers. Since these providers may collect personal data like your IP address we allow you to block them here. Please be aware that this might heavily reduce the functionality and appearance of our site. Changes will take effect once you reload the page.